In Studies 1 and 2, the proportion of patients who remained relapse free* at 6 months was greater for APRISO than for placebo.1 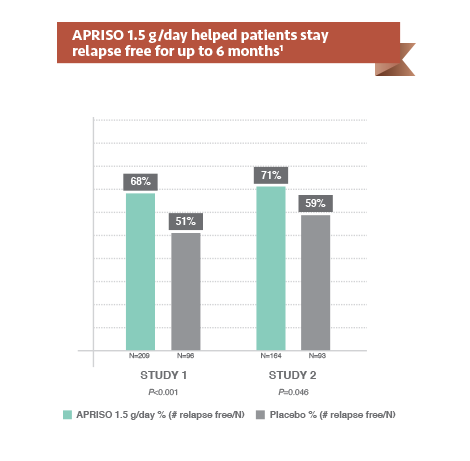 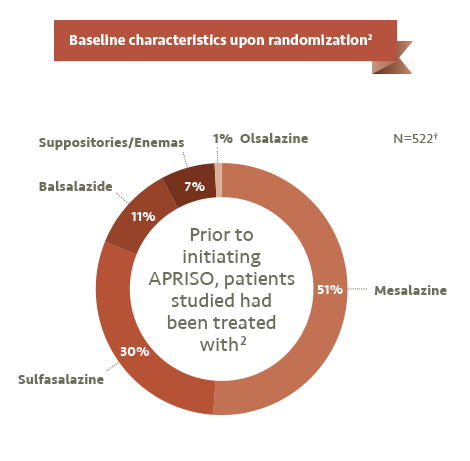 Study Design: In 2 randomized, double-blind, placebo-controlled, multicenter trials conducted in 562 adult patients in remission from UC, the effectiveness and safety of APRISO 1.5 g given once daily compared with placebo was evaluated. Subjects were randomized in a 2:1 ratio to receive either 1.5 g (4 capsules total) or matching placebo capsules for 6 months. The primary endpoint was the proportion of patients who remained relapse free at 6 months (the end of the trial). Relapse was defined as a rectal bleeding subscale score of ≥1 and a mucosal appearance score of ≥2 on the Sutherland Disease Activity Index (UCDAI). All early study withdrawals were considered treatment failures.1

Study Design: A post hoc analysis of 2 identically designed, prospective, randomized, double-blind, placebo-controlled, 6-month, multicenter trials was conducted in 487 adult patients with UC to evaluate the efficacy of once-daily granulated mesalamine 1.5 g vs placebo, in the maintenance of remission from UC, in patients who switched from other 5-ASA formulations. Patients were randomized 2:1 for granulated mesalamine and placebo, respectively.2

*Relapse counted as a UCDAI rectal bleeding score of ≥1 and mucosal appearance score of ≥2, or premature withdrawal for any reason.
†Some subjects used multiple formulations; therefore, the total number of treatments (522) is greater than the number of participants (487).

The safety of APRISO has been evaluated in two 6-month placebo-controlled trials and for up to 24 months in an open-label extension study1,3

The safety and efficacy of APRISO for treating ulcerative colitis beyond 6 months has not been evaluated in controlled clinical trials.

In clinical trials, APRISO was generally well tolerated, with most AEs reported as mild to moderate in severity1

Study Design: A phase 3, multicenter, 24-month, open-label extension study evaluated the safety and tolerability of once-daily APRISO (1.5 g) in 388 patients who previously achieved remission from mild to moderate UC. Eligible, enrolled patients had successfully participated in 1 of 2 previous phase 3, 6-month, double-blind, placebo-controlled trials (n=280), or were new patients in remission (n=113). Safety was assessed during clinic visits by monitoring AEs and the performance of clinic laboratory tests. A post hoc analysis of UC-related AEs was used to determine the risk of UC recurrence.3

You are now leaving www.aprisorx.com

Thank you for visiting www.aprisorx.com. By clicking OK you will be taken to a website or sites to which our Privacy Policy and other rules do not apply. Salix Pharmaceuticals does not possess editorial control over the content of the information provided in such website(s) and therefore does not warrant their accuracy and completeness. You are solely responsible for interactions with such website(s).